Across the Golden Gate Bridge, 20 miles north of San Francisco sits the town of San Anselmo. Not far from San Rafael in Marin County, this small town takes up 2.7 square miles and is home to approximately 12,000 residents. With only three major roads that meet at the Hub near the central business district, San Anselmo is a small town but one with a lot of character. With many unique shopping opportunities, a rich history and creek-side location, San Anselmo has made a name for itself as one of the best communities in the area.

The skyline of San Anselmo is one dominated by the hills of Ross Valley, with Grove Hill and Red Hill to the north, Bald Hill to the south west, Moore Hill to the east and Mount Tamalpais in the south. The town itself was largely built on a natural floodplain, so while the climate is usually mild, with an average temperature that falls between 53 and 75 degrees Fahrenheit, the town’s annual rainfall of 30-40 inches often causes the San Anselmo creek to flood. There have been several times in San Anselmo’s history (1925, 1940, 1963, 1982 and 2005) where heavy rains have caused the creek to flood the center of town with up to four feet of water, sometimes causing millions of dollars of damage. However, the town has adapted over the years. The historic raised railroad bed, which is now Center Boulevard, acts as a dike, protecting many of the houses on the west side, and the homes in the Flatlands on the floodplain have been built with raised foundations, which helps in times of minor floods.

Though flooding occurs periodically, residents and visitors still find San Anselmo a lovely area to be in all year long. The town is actually revered as the “Best Town Other Than Your Own” in the area. Voted to that position by Pacific Sun readers, the town also boasts such titles as “Best Non-Mall Shopping Town in Marin County” and “Best in the West” for antiquing, as declared by Sunset Magazine. In fact, San Anselmo is regarded as the Northern California Antiques Capital. In addition, the town’s charm is complemented by multiple fine-dining opportunities, cafes, boutiques, galleries and hiking and biking trails. Catering to a diverse group of people, attractions include the Robson-Harrington House and Park, the American Legion Log Cabin and the Carnegie Library. Annual events centering on art, wine and antiques also draw many to the area.

In addition, San Anselmo is home to the San Francisco Theological Seminary, which was built in 1892. The seminary is partially responsible for the development of the town. Before that time, the area was mostly pastoral, but the arrival of the railway changed that, drawing both residents and businesses to the town. Currently, residents of San Anselmo enjoy an above-average income per household and a higher quality of life than enjoyed in most of the country. With a family focused community and San Francisco and other Bay Area attractions not too far away, this charming town continues to be an ideal place to live in Northern California.

The property shown immediately below is 117 Crescent Road which I sold for $2,410,000. It is located just a short walk to downtown San Anselmo in its famous Seminary neighborhood. 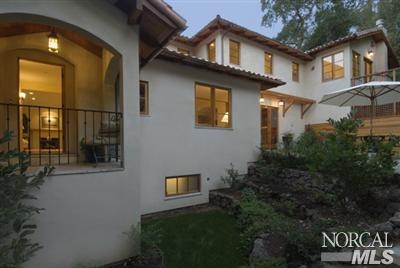 Find a Home in San Anselmo